A downloadable game for Windows and macOS

You are the last working medical droid on a space ship that is thrown into disarray when a mysterious explosion occurs. With the destruction of most of the ship's systems, its human inhabitants float in a zero-gravity soup, deep in cryosleep. It's your job to keep them safe and carry them to the few remaining escape pods. But something else seems to have gotten on board, and it stands between you and safety.

About this version
This is a short prototype testing out one level of the game, which takes about 15 minutes to play. It was made by a few of us at Free Lives (developers of Broforce and GORN) over the course of a month as part of a new prototyping venture. As such, we'd love to hear your feedback! Please send any thoughts, feedback, or annoying bugs you've found our way, either via this page, or on Twitter. Thanks for playing!

Please release the full game. This was amazing. if it got a release id, be sure to buy it

Looks good exited to play it

will there be a 32x bits version for windows

Great demo, both aesthetics and gameplay. Only audio was kinda weak, with some essential sounds missing (like, why drone engines are silent?) and ambient was too quiet, noticed it is actually there only in the end (which would be fine if there would be more sounds to catch ear but as it is game is a bit silent).

Glad I played it!

had ton of fun playing it! just a small situation i got stuck in but otherwise i super enjoyed it!!

you can see me plaing here if youd like:

Awesome concept. I'm really looking forward to the full game. The game is fun to play and I really like the lil robot guy. I played this for my Bloodcurdling Barrage in which I post daily videos for all of October.

Reply
I lik goozes2 years ago

I absolutely loved this game! Such a unique feel, and I loved the puzzle/strategy aspects. I gave some thoughts at the end of the video. Looking forward to seeing the full release!!

This was fantastic and I can't wait for the full product.

Great graphics, great premise. Really enjoyed the fights with the little aliens, and sucking up loot.

I found myself looking for a way to set things down gently -- if that's possible it wasn't obvious to me. I felt a little bad about flinging unconscious humans around -- on the other hand if that's intentional it's funny. Maybe acknowledge your mechanical limitations in the narrative at some point.

Hey, thanks for your feedback, we really appreciate it! I'm glad you enjoyed the combat too.

Yeah, I tend to agree with your point about acknowledging the mechanical limitations. I'm divided about setting things down gently: There are times that the unpredictability creates some fun situations, but other times it can be frustrating. It's likely that the robot's grabber has its springiness set a little too high, so that when you release it, the attached object gets nudged with a little too much force. I'll experiment with it and see what feels good.

Hey! Here's my feedback: Playing this game was pretty interesting and absolutely fun experience. Some of tricky situations really reminded me Spelunky where some different consequences could bring you to death, which in this case was humans death. Like I was holding one of the passengers leg moving through some doors and then I saw this little octopus jumping to me, this was really surprising and unpredictable so I tried to throw some stuff around to kill him and then when I was at low HP I just threw this explosive barrel too close to my human and... well yea that was something I really remembered).

Visuals are also on a very good point, since rendering 3D environment in pixels gives something from 2D old nice feeling mixed with some awesome lighting. Which is really neat.

Controls are a bit tricky, but even I understand that's some sort of main mechanics of this game, sometimes they aren't working right, for instance: Releasing mouse button doesn't throw some Items like it did before, grab throw obstacles could be too hard sometimes,  and finally there is no indicator on mouse crosshair that could show you when you CAN grab and when you can't, this is something I found In my game (which is just a bit similar to yours) when I was making it, you could find it on my page <Bob the blob>.

Anyway, I enjoyed a lot in general and I really hope you'll finish this game releasing it on Steam someday and I'm pretty sure if this will happen, I'll buy it). Good luck!

Thanks a million for the detailed feedback! this helps a lot!

I assume so, are you having trouble with the link?

I played through the demo and actually uploaded my gameplay to my channel. This was an absolute blast to play and I truly hope that you further expand upon this! The gameplay was incredibly fun, engaging, and, most importantly, smooth! To top it all off, the art and sounds were beautifully done! Keep up the great work, my friends! Thank you for this!

Hi there, thanks so much for playing! We're so glad you enjoyed and it, it's always super motivating to see people enthusiastic for more :)

We're working on a different prototype at the moment, so I'm not sure how much more we'll have in the immediate future, but we're all really excited to try some new stuff with this. I'd like to add a little more puzzling, and definitely an upgrade or crafting system, as well as more enemies and some more challenging combat mechanics. In the mean time, we'll squeeze in a small update sometime soon with a few fixes for issues we've found.

Again, thanks for playing!

Thank you for making this awesome little project, I was more than happy to play! I'll definitely have to check out that prototype, as well! If it is even half as entertaining as this one, I will love it! I hope to see more of your ideas with this fairly soon! It is such a unique concept that could readily be expanded upon! I can definitely see keep the crew alive getting increasingly more difficult. Keep up the great work, my friends!

This game is interesting. I love the idea and the graphics. I have to say a job well done on this prototype. If you would like to see my thoughts and gameplay check it here

Hey! Thanks for playing, and for doing a video on the game. I really enjoyed it :)

Yeah, I agree about the health. Scrap metal was put into the game as a kind of "coming soon" for some kind of crafting or upgrade system that I wanted to put in, but it doesn't do anything right now. A bunch of people have suggested that it should heal you a little, so I'll add that in for the next small update. Thanks for your feedback, it really helps! And glad you enjoyed it.

This was a really fun prototype to play, and I can't wait for the main release.

Gameplay was really smooth with the only 'issue' being that it's hard to gently let anything go so I propel my poor humans at lightspeed. Hopefully they're wearing helmets.

The art is absolutely fantastic, looking gorgeous and is exactly what a pixel game can be.

Hi! Thanks so much for playing, I really enjoyed your video :)

I'm glad you liked the game, and thanks for your kind words! I know what you mean about letting things go gently. I might need a bit of artificial stabilisation there to keep things from getting frustrating. There's a lot more we'd like to add if and when we do a full version, but it always gets me keen to add more stuff when I see people playing and enjoying the game, so thanks again!

Fantastic concept and execution, wish I could've sat in on the brainstorming session!

I also like that it's not your typical space ship/station disaster game where all the humans are dead to begin with. Hopefully more horror games can hire your space engineers!

Thanks so much! That's really kind of you. We're definitely keen to explore even more of the human caretaking elements in a later version of the game. But thanks for playing and we're glad you enjoyed it.

Had such a good time with this! Really cool.

Thanks so much! I'm glad you enjoyed it :)

I actually just finished a second playthrough, since i killed grace by dragging her through the radiation the first time and i wanted to see if i could get a better ending. I really like the uneasiness caused by having to put your humans in potential danger by dragging them in front of a door that's about to open to unlock it.

Reply
Neco The Sergal2 years ago(-1)

The aliens in the elevator shaft have a very annoying habit of closing the floor sliding-door if they get up there, making it impossible of re-opening it from underneath.

we will make a handle on the bottom to fix the problem, thanks for the feedback!

thanks so much for playing!

Dope concept, art style, and execution! I like where it's going, and the moody lighting is great way to set in uncertainty.

thanks! That’s the best news! 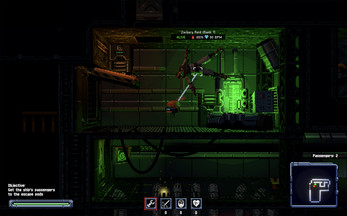 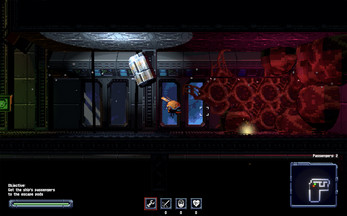 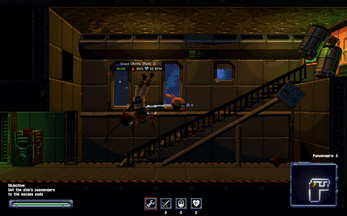